Blue are the distant hills... and what about Bydgoszcz? 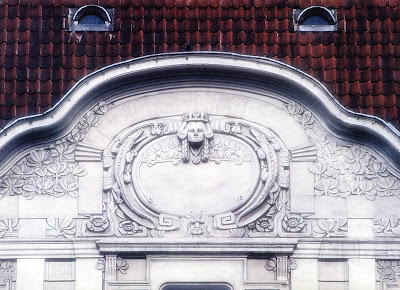 Of course, there is more to it than meets the eye. I invite you to come with me and see its charming spots, to make a journey to the times of fin de siécle and Bydgoszcz Art Nouveau. Most examples of that period's architecture have been preserved in the city's northern area. Apartment houses and buildings from the late 19th and early 20th centuries are found almost everywhere in that part of the city, as it was in a northerly direction that Bydgoszcz was expanding in those times, swelling along both sides of the road to Gdańsk.
However, before we start our walk let me explain a few things. The architecture of the period in question represents two main styles - academic eclecticism based on historical styles and Art Nouveau (also called Secession) which was an attempt to create a new original style in reaction to the first. When walking around Bydgoszcz we will pay attention to these differences. There is one more thing worth mentioning - what we can admire today we owe to recent renovations carried out according to preserved old pictures or what has survived by pure chance. Some buildings have been saved from post-war "reconstruction" or "renovation", which would destroy facade decorations characteristic of the epoch. This was aimed at providing them with a pseudo-modern appearance, which was in fact caused by a dislike for careful maintenance.

THE SPIRIT OF ECLECTICISM

To keep in chronological order we should start with buildings built in the late 19th century in a style that combined features of previous epochs - eclecticism. This style, often confused with Art Nouveau, gave Bydgoszcz a couple of interesting projects, among which the works of Józef Święcicki play a leading role. This architect's name is associated with the most outstanding surviving structures that exhibit features of historicism. These are the "Eagle" Hotel, and apartment houses at 1 Wolności Square and 63 Gdańska Street (the popular "Etola").

There is one building in the city which has become legendary and deserves the most attention. Of course, I mean the "Eagle" Hotel, the showpiece of the city. Built between 1893 and 1896, it has hosted prominent guests and has combined living, hotel, and commercial functions since its beginnings. Particularly impressive has always been its magnificent staircase (with a richly decorated gilded and silver-coated balustrade), stained glass windows, and crystal-glass mirrors. Now, after careful renovation which has been carried out recently, it can be admired by guests again. The facade also attracts attention with its splendid decorations rich in various details, which it has regained together with its original architectural form (the removal of incongruous arcaded passages). A close look would reveal a fine blend of architectural details taken from previous periods - classicism, baroque, etc. Its structure, symmetry, a distinct division into horizontal zones by means of prominent cornices and varied rustication textures; pilasters and columns, atlantes, an escutcheon in the portal, panels, keystones, balustrades are only some of the elements borrowed from historical architecture which appear on this facade. Today, thanks to careful renovation, we can admire this charming product of imagination and architectural artistry.
Apartment houses designed by Święcicki are also fortunate in the fact that they have been renovated. Their decorations may not be as rich, but their details joined together according to the same rules as the "Eagle" Hotel are also admired. By the way, Józef Święcicki, their designer, used to live in one of them at 63 Gdańska Street.

Art Nouveau, which has various different names in individual countries, is a style common in later periods. It was created to express a total rejection of contemporary art and social rules. It was the beginning of a crusade against the ugliness of common furniture, interior decor, and traditional architecture.
Beauty was sought after in everyday life, in common objects from man's environment. A new world was created for man's wellbeing, free of standards, canons, and traditional restrictions. This common desire for a new style emerged in many European countries almost at the same time. Numerous publications with collections of ornament and architectural drawings fostered a widespread promotion of Art Nouveau forms and motifs. Provincial artists willingly used these patterns, sometimes transforming them creatively and sometimes trivializing them.
Today, talking about Art Nouveau does not bring accusations of having bad taste or even a fondness for low-standard art. However, this style was not taken seriousiy until the 1970s. Although Art Nouveau had a basic means expression, it is difficult to use its patterns because this style always showed individual features characteristic of the countries and environment in which it was applied.

In order to make it easy to recognize Art Nouveau architecture among our city's charming buildings some of its main characteristics have to be mentioned. These are for sure atectonics, asymmetry, linear decorations, plant and animal motifs borrowed from the local environment (chestnut-tree leaves instead of acanthus leaves, owls and herons instead of lions, etc.), a new stylization of human shapes with elongated proportions, whose sex is sometimes hard to recognize. Another characteristic of Art Nouveau facades is some flatness in comparison with the heavy and elaborate eclectic facades.
Thanks to highly educated local architects, Bydgoszcz acquired several high-class works. Out of many buildings built by Bydgoszcz designers I have selected several of the most characteristic and beautiful examples.

We pass under the arcades at 2 and 4 Focha Street quite often. Let's take advantage of the time waiting for the green light and raise our eyes...
The apartment house at 2 Focha Street was erected between 1900 and 1901 for the merchant Max Zweiniger according to the design of Karl Bergner, one of the leading Bydgoszcz architects of those times. Stylistically, the building is similar to its neighbour (4 Focha Street) which was built in 1901-1902 for the merchant Rainhold Napiewocki and also
designed by Karl Bergner. The house at 2 Focha Street has richer decorations, characteristic of corner buildings. The lack of symmetry in the facade alone indicates the influence of Art Nouveau. Decoration details seem to be lacking; but we can find here women's face-masks with mysterious expressions and enigmatic smiles, each of them being different. Fiat, circular cartouches are framed with chestnut-tree leaves and stems, and are adorned with shells and lizards. Finding these marvellous details on the facade is great fun.
Nearby there is a beautiful solar motif with a silhouette of a flying bird, and on the rounded corner a woman can be seen, who represents Art Nouveau good looks - elongated proportions, flowing hair, and a flat boy-like figure. "No. 4" borrowed part of the motifs from "No. 2" - masks, vegetation growing on the facade, and forged balcony balustrades with a soft line using plant motifs. Regrettably, not much of the original interior decor has survived - some stucco work in the staircases and the "chestnut-tree" grating in the door's fanlight in the entrance hall of "No. 2". Imagine how beautiful these houses were! 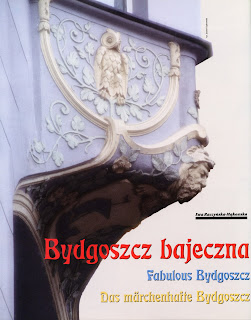 It's time to go to the bestknown Art-Nouveau Street in Bydgoszcz - Cieszkowskiego Street. It is commonly said that it's the best place to look for Art Nou-veau. Actually, that's true to a great extent. On Cieszkowskiego Street there are a couple of houses with their original appearance from the period when they were built. Let's have a closer look at three buildings - 3, 7 and 9.
When looking at newly renovated houses it is easier to see their beauty; colours have been made more visible, as well as architectural details (some have been reconstructed). Faces of strange people are looking at us, a slender heron is walking in reeds, we can see an owl, sun rays, wind personifications, women's figures interwoven with leaves. It's hard to believe that we have not noticed them before.
More imagination is reąuired to see the beauty of house No. 3. It was built by Paul Bohm in the years 1903-1904 and has not been renovated yet. Nevertheless, the unique forms of window frames with slightly curved horizontal rails and fine bow-shaped muntins arouse admiration even now. The entrance door is particularly worth attention - how beautiful it must have been -glazed with stained glass, crowned by a fanlight, all bordered with a winding ribbon coming down to the socle in elaborate helices. Perhaps this house will also regain its former glamour, like many others in Cieszkowskiego Street.
Having got to know the architecture of Karl Bergner let's also look at his designs in Cieszkowskiego Street. Here we see two houses (Nos. 7 and 9) uniform in style, which were built in the same period (1900-1902). We easily recognize their author's favourite motifs - flattened pseudo-cartouches, ribbons, shells, chestnut-tree leaves, and women's heads above portals. Have you noticed the night and day personifications hidden in the building's cornice? These are two women whose appearance we already know, sitting among winding leaves - one of them awake, accompanied by a cock and the other leaning on her elbow, as if she was sleeping at the side of an owl - these decorations are hardly ever noticed.
Of course, we might admire the Art Nouveau elements hidden on Cieszkowskiego Street for ages, but let's go on and find their charm somewhere else.
AVENUE OF DREAMS

Now let's go to Mickiewicza Avenue, which together with its buildings has one of the most beautiful architectural layouts. The street's axle is closed by the Plant Growing and Acclimatization Institute; its northern frontage is made up of a row of splendid apartment houses and in its eastern part there are villas with light graceful proportions. Its Southern part opens towards a park. The street's generał layout has survived untouched in its original form. The splendour of the apartment houses that were built here is unique in our city. They were erected for the most influential people and architects. In No. 1 Rudolf Kern used to live, the designer of this house, and the No. 3 house was built by Erich Lindenburg for himself.
The objective of Art Nouveau designers was to create houses which would not only be beautiful but also comfortable. Although it's difficult to find out what the original interior layout once looked like by seeing contemporary flats made by dividing the original ones, quite a number of carefully chosen interior furnishings have been preserved - ovens, stained glass windows, wall paintings, thick stamped out wali paper, terracotta mosaics in entrance halls, parts of balustrades, and stucco work. Surprisingly enough, all these houses were built in the same period, between 1903-1906. What a pity that the most beautiful decorations have been stripped off these magnificent houses. Today when comparing old drawings or photographs with the houses current shape I begin to dream. Splendid details on the No. 1 house, which look as if they were hollowed, with motifs of weird masks which translate into lush plant runners with astonishing patterns now embellish only a few places, for example, the portal. Once they were also found on balconies and the triangular gable on the house's Southern side.
IT CAN BE MORE BEAUTIFUL 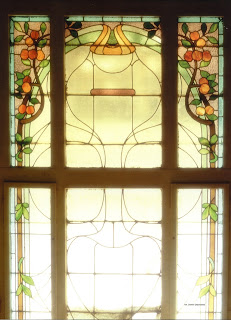 Bydgoszcz can boast many examples of fascinating architecture from the late 19th and early 20th century. This is a real challenge for the local authorities, curators of old architecture, private owners, but also a matter of concern. It's not far from charming scenery and fabulous atmosphere to negligence, oblivion and pulling down. The beauty hidden in splendid hundred-year-old houses is still admired. This is the city's significant asset. Suffice to mention the admiration aroused by the renovated "Eagle" Hotel, the magie of its age, which can in no way be replaced by any new, advanced, luxurious building. The local authorities should use the opportunities offered by these unique structures through their proper utilization and adequate maintenance. This will be a challenge for several dec-ades to come.
This is particularly worth mentioning now when the city is celebrating its anniversary.
Wyślij pocztą e-mailWrzuć na blogaUdostępnij w usłudze TwitterUdostępnij w usłudze FacebookUdostępnij w serwisie Pinterest